However, according to the statute:

“The secretary of state shall publish on the official secretary of state website results by precinct for all federal offices, statewide offices and for state legislative offices not later than 30 days after the final canvass of the primary election is complete.”

So it appears that the SOS office is not following the law.

I hope that by then the SOS office will be following the law.

Update 2021-01-05 Happy to report that the 2020 general election results have been posted. The primary results still have not. 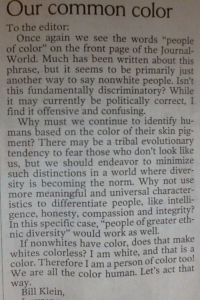 Some things I would love to hear from political candidates in Kansas about climate.

Climate change is a present crisis.

We need to act like it. That’s difficult to do because it’s a slow-motion, planet-scale crisis, and we can only really see it when we imagine it together, collectively. We start by naming it and talking about it and our fear about it.

We can’t fix this at a micro, personal, individual level.

Better light bulbs and electric cars and recycling will not fix it. We need macro level policy and infrastructure investment. We need to join with our neighbors (e.g. re-join the Paris agreement) .

We need to fund and listen to our scientists. That includes:

We need to reduce the amount of carbon in the air.

That means eliminating our reliance on fossil fuels through a carbon tax and investment in alternative fuels, and changing our approach to land use (reforestation, soil improvement, what and how we farm and eat). That makes climate change an economic issue.

Kansas is getting hotter and wetter.

Climate change adaptation is already happening. We need public policy to reflect our need to adapt. We need the state and federal governments to invest in urban, agricultural and ecological planning to reflect that fact. That makes climate change a public health and safety issue.

Housing is always cheapest in the flood plain.

No one expects you, as a candidate, to fix the problem.

That’s not what we’re asking of you. What we’re asking is that you talk about the problem, and that the story you tell about it reflects the anxiety and urgency that we feel about it. It helps to have you reflect that back to us, and that you are not afraid to go up to Topeka or Washington and stand up and say we need to do some big, bold and imaginative things to address it. Not one thing, but many things: it’s about both reducing CO2, and making the kind of structural, policy investments that will help our cities and towns and farms adapt.

I knew that one of the big issues affecting election outcomes was how the maps get drawn for political districts: state legislative districts, congressional districts, etc. But how did those political district boundaries correspond to the votes that are cast? No one seemed to have a map that could show me, for any given district, how the votes in that district for a given election correspond to streets and addresses. Or how did a particular neighborhood vote from one election to the next. State elections can often be decided by dozens of votes, so knowing how a particular neighborhood votes (or fails to vote), from year to year, could be a significant datum to understand.

I realized that it was hard to take a research and data-driven approach to a geographic problem without good geographic data. And none of the Democrats I spoke with seemed to have that data. So I decided I was going to create a map-oriented research tool for elections over time.

The Map Is Not The Territory

One fact in particular made the map data hard to acquire and use. Election results are reported to the Kansas Secretary of State at the county level. Each county clerk tallies up the votes (a process called certifying an election) and sends those numbers to the SoS office. Kansas has 105 counties. If you look at a map of Kansas counties, one thing you will quickly realize is that they are all mostly the same size and shape. That’s because the county boundaries were drawn very early in the state’s history without regard to where people lived and without knowing where they would settle a century later. County boundaries ignore population and they do not change over time.

Political district boundaries, however, are entirely about population and they change over time based on relative movements in the population. The idea around equal representation is that each district has roughly the same number of people, not the same number of acres. This is what gives political map drawing its power, because the political district boundaries could be drawn in carefully constructed ways to maximize a particular kind of voter in a given district.

So elections are reported by counties. Counties are about land size and don’t change. Districts are about population and change frequently. To borrow a math metaphor, what is the least common denominator?

The precinct is a geographic boundary that aligns with a political boundary. Every county is made up of one (often dozens) or more precincts. Every ten years the county clerk’s office divides the county into territorial entities in order for the federal government to count all the people in the census. Those territorial entities are called census tracts. Everyone gets counted in exactly one (we hope). Each census tract is also a voting district, or precinct. (It gets more complicated in the ten years between census takings. Read on for more.)

Seemed straightforward enough at the time, I thought. I just need to look around on the internet and between the SoS website and the census.gov website, I’m sure I’ll find everything I need.

Oh foolish, silly, naive man. I look back on you now and chuckle at your enthusiasm. Of course, if I had known how hard it was to acquire those data and make sense of them over time, I might not have started in the first place. Deceptively simple problems get a lot of yaks shaved.

Fortunately, I quickly stumbled upon other people who were thinking the same things about maps and precincts, and other people who had been working hard at the precinct election data problem for a long time. I was able to follow in their footsteps.

In my next post I’ll dive into the nitty gritty of the challenges I encountered building the map.

I am not particularly attached to the Democratic Party. Until 2017 I wasn’t registered as a Democrat. (And I only registered as one because the KDP, reasonably, wouldn’t let me help with their data otherwise.) My personal politics are more green/socialist. I just saw the Democratic party as the group best positioned to swing state races in 2018 and defeat 45 in 2020.

So in 2017 I reached out to my state and county parties and started cold-calling people. Would they meet me for coffee and talk about politics and technology? Yes they would!

I asked everyone three questions:

I’m very grateful for everyone who explained how precincts work, how county and state parties work, how the voter file works, how campaigns work, how campaign technology works (and doesn’t work). I spent several months meeting all sorts of Democrats, in Kansas and elsewhere (thanks to the wonders of the internet) and listening to their answers to my three questions. It turns out I knew very little about how elections work. Everything else I have been doing since then stems from something I discovered while talking to the Democrats that year who were so generous with their time and knowledge.